There are multiple views on what the role of journalism is in society, varying from just reporting facts to its perceived role as being a watchdog, a guardian of democracy, an educator, a Fourth Estate, to giving a voice to the voiceless and acting as an advocacy actor. What ever that role may or should be, news media and journalists can only perform their role if the environment in which they work is conducive to free and independent media. There are multiple initiatives that assess a country’s media landscape and/or state of freedom offline and online for media and journalists. These are based on a set of indicators that attempt to describe the whole, or a specific range of enabling factors for media and journalists to operate free and independent and to contribute to good governance and democracy. These assessments differ widely in their aim, scope and methodology, which often include research methods like surveys, structured interviews and analysis of secondary data in the open domain and subsequent scoring by expert panels or research staff (updated July 2020).

Deusche Welle Akademie has developed an interactive map, the Media Freedom Navigator, which gives an overview of the status of press and media freedom around the world and regionally. It is based on a number of methodologies, presented here but also including the ‘home grown analysis of the media landscape’ African Media Barometer, to assess and / or rank the enabling environment for the media.

Developed in 2006 and endorsed in 2008 by the Intergovernmental Council of the International Programme for the Development of Communication, the UNESCO Media Development Indicators is a widely acknowledged framework aimed at media development that takes a broad perspective. It focuses on five main categories of indicators (which are broken down in issues that each have key and sub-indicators):

In 2012, UNESCO published the Gender-Sensitive Indicators for Media (GSIM) as an extension to the MDIs. The GSIM is a framework of indicators to gauge gender sensitivity in media operations and content. The main focus of the publication is on the equality and gender dimensions of social diversity in the media. The key target group are media outlets. While the MDIs framework acknowledges the role of government policies and media development assistance, the GSIM lacks a clear focus on the role of government actors and donors in terms of media development. However the push towards a more active response by government actors is in the hands of the Global Alliance for Media and Gender (GAMAG), which assumes responsibility for follow-up of the GSIM and who recently published two reports focusing on policy change in this area:

More information on the enabling environment and gender equality in and through the media can be found on our Gender Theme pages.

Media viability is addressed throughout the MDIs framework. In 2014, UNESCO together with Deutsche Welle Akademie drafted the Media Viability Indicator (MVI) framework presented as a sixth category and following the same methodology of the MDIs. The draft states:

‘An assumption for these indicators is that domestic economic, social, and political conditions must provide a supportive environment for the emergence, development, and continuance of news media, and the organisations themselves must act in ways that promote their survival. Promoting viability in this sense should be a recognised objective within media development efforts‘.

Since this draft was presented, the role of tech giants and the spread of disinformation has increased significantly. Development of the MVIs continued and the result will be discussed in the next section.

Analysing the enabling environment by use of the MDIs framework needs to be complemented with the additional work that has been done on the Journalist Safety and Media Viability indicators. The GSIM lacks the focus on the role of government and donors in terms of media development. A gender sensitive analysis of the enabling environment would need to take into account the lack of focus on gender and would need to be accompanied with more up-to-date sources of information regarding gender equality in and through the media.

For an overview of MDI and JSI reports, see the UNESCO website and this infographic, which also includes the Internet Universality Indicators (more on this below). There are 6 DG reports as well as several GAMAG reports available on the UNESCO website.

Launched in 2020, Deutsche Welle Akademie, has developed the Media Viability Indicators, following a joint project with UNESCO. The framework analyses the viability of a media system, reflecting a change in analytical scope warranted by the crisis in the news media in terms of financial sustainability, editorial independence and content quality. The five key indicator categories cover:

Each category consist of 5 key indicators and there are a total of 119 sub-indicators. Originally, the indicators would be a sixth category to the UNESCO Media Development Indicators, but due to the scope and size of the framework, it can be used as an alternative by media development organisations (they do not have the official endorsement of the IPDC panel so it cannot substitute the MDIs within the UN system). While its primary focus is on media viability in terms of financial sustainability, editorial independence and content quality, it does give due attention to journalist safety issues (covering the physical, legal and psychosocial dimensions) in the Politics category. Gender equality in relation to media viability is by and large not considered in the framework, safe for 3 sub-indicators on training and hiring practices under key indicator Business Expertise. For more information on gender equality in the work place and media viability:

Given its recent introduction, there are currently no MVI reports available.

IREX’ Media Sustainability Index provides analyses of the conditions for independent media, with a sustained focus on Europe and Eurasis, and has been around since 2000. The MSI defines the enabling environment through measuring a number of contributing factors of a well-functioning media system. Those are defined as objectives:

The 7 to 9 indicators per objective do not focus on gender equality and inclusivity in and through the media, although this may be implicit in the indicator that measures plurality of news sources that offer multiple viewpoints. The first objective includes an indicator focusing on crimes against journalists and fighting impunity. The data is gathered primarily through panels of local experts that ‘reflect gender, ethnic, and religious diversity as appropriate‘. There are currently 80 country reports available inter alia covering countries in Europe and Eurasia (since 2001), Africa (2006-2012), Middle East and North Africa (2005-2009), and two countries in Asia (Timore Leste 2008, Sri Lanka 2017/2019).

According to the IREX website, the MSI will be replaced by the Vibrant Information Barometer (VIBE) in 2021.

Next to analyses that take a comprehensive approach towards analysing and ranking the enabling environment for media development and media viability, there are several initiatives that focus exclusively on the online environment.

UNESCO’s Internet Universality Indicators are a set of 303 indicators that aim to assess the state of Internet development at the national level according to the ROAM principles of human Rights, Openness, Accessibility, Multi-stakeholder participation. They update and complement the UNESCO Media Development Indicators, the Journalist Safety Indicators and the Gender-Sensitive Indicators for the Media. Their relevance to media development and media sustainability i.a. follows from their focus on:

The ROAM-X indicators contain a number of (category X) cross-cutting indicators ordered in a number of themes. Theme A focuses on Gender and ‘draw[s] attention to issues of structural inequalities within society and towards groups that often face challenges where access, adoption and use of the Internet are concerned.’ The gender digital divide is addressed through seven indicators.

Theme D indicators on Trust and Security focus on the integrity of the internet and related services and acknowledges that ‘threats may come from diverse sources, including governments, non-state actors, criminal organisations and individuals’.

As of July 31st 2020, national assessments have been made of Benin, Brazil, Germany, Ghana, Kenya, Paraguay and Senegal and have been or will be published soon on the UNESCO Internet Universality Indicators website.

The national economy is an indispensable part when analysing media viability and forms an important determinant of the enabling environment. However, one that can hardly be influenced by the different media landscape stakeholders, other than government actors.

The GNP per capita of a country determines to a large extent the spending power consumers have to pay for their news content. The size of the economy determines to a certain extent the total amount available for non-state advertising income. Within the sphere of control of a government, foreign direct investment, innovation and ICT development are essential drivers of economic progress that benefit consumers, businesses and the economy as a whole.

And the government determines the level of competition within and the structure of the media market through media laws and the regulatory framework and extracts income through taxation (see the theme page on Media Law and Regulation).

On a macro level, there are a number of methodologies that may help construct a richer picture of the economic enabling environment for news media.

The World Bank has developed the Doing Business Indicators which provides objective measures of business regulations for local firms in 190 economies. The methodology consists of multiple topics, of which two are particularly relevant to news media: Starting a Business and Paying Taxes.

The ICT Development Index (IDI), which has been published annually by the International Telecommunications Union since 2009, is a composite index that combines 11 indicators into one benchmark measure. It is used to monitor and compare developments in information and communication technology (ICT) between countries and over time. The main objectives of the IDI are to measure:

The ITU publishes the Measuring the Information Society Reports 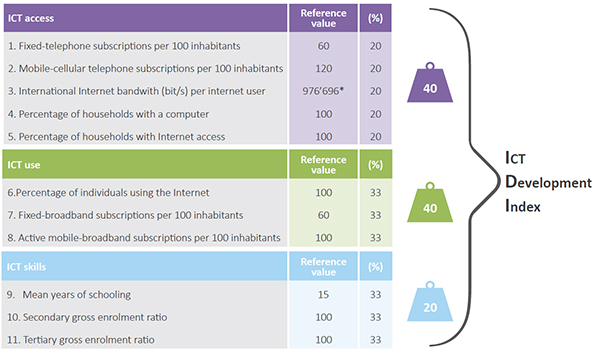