The report evaluates the state of democracy in the region stretching from Central Europe to Central Asia. For 29 countries, Freedom House provides numerical ratings in seven indicators that broadly represent the institutional underpinnings of liberal democracy. These indicators include: (1) National Democratic Governance; (2) Electoral Process; (3) Civil Society; (4) Independent Media; (5) Local Democratic Governance; (6) Judicial Framework and Independence; and, (7) Corruption. The ratings are based on a scale of 1 to 7, with 1 representing the lowest and 7 the highest level of democracy.

2022 NIT showcases the 18th consecutive year of democratic decline in the Eurasia region. The results emphasize that the movement of the countries away from democracy has accelerated as entrenched leaders have rejected liberal democracy and embraced personalist forms of authoritarian rule, in which the state’s power is concentrated in the hands of an individual. Increasingly, the countries of Central and Eastern Europe and Eurasia are headed toward two different destinations: the full-blown autocracy and the gray zone of hybrid governance, where ostensibly democratic structures belie undemocratic practices.

Azerbaijan, Belarus, Russia, and the five Central Asian countries continue to sink to the bottom of Nations in Transit’s scale. Meanwhile, there are now 11 hybrid regimes in the region, up from four in 2004. Just six countries are still designated as consolidated democracies, down from eight when the 18-year period of decline began: the Czech Republic, Estonia, Latvia, Lithuania, Slovakia, and Slovenia. However, buffeted by the corrosive effects of illiberalism and corruption, all these six suffered score declines in 2021. 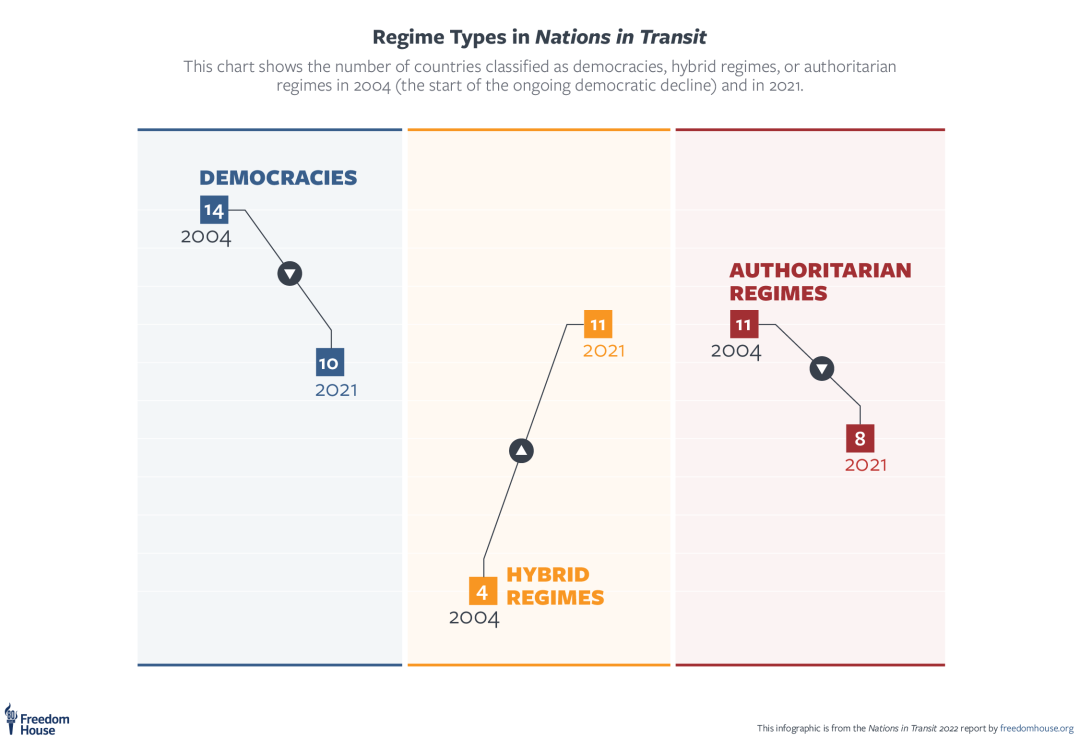 In the region’s remaining democracies, corruption prevails to be the most glaring weakness, scoring on average lowest across the seven indicators. On the other hand, as leaders in this region turn to antidemocratic and illiberal forms of governance, civil society is confronting new and disquieting threats. Throughout the 18 years, Civil Society has remained the highest-performing indicator in the Eurasia region.

NIT 2022 closely examines the state of press freedom within its fourth indicator, Independent Media (IM). It assesses libel laws, harassment of journalists, and editorial independence, as well as the operation of a financially viable and independent private press,  and the functioning of the public media. It is worth mentioning that when it comes to independent media, the average score in the remaining democracies in the Eurasia region is second lowest, only a half-point higher than the lowest indicator, Corruption. 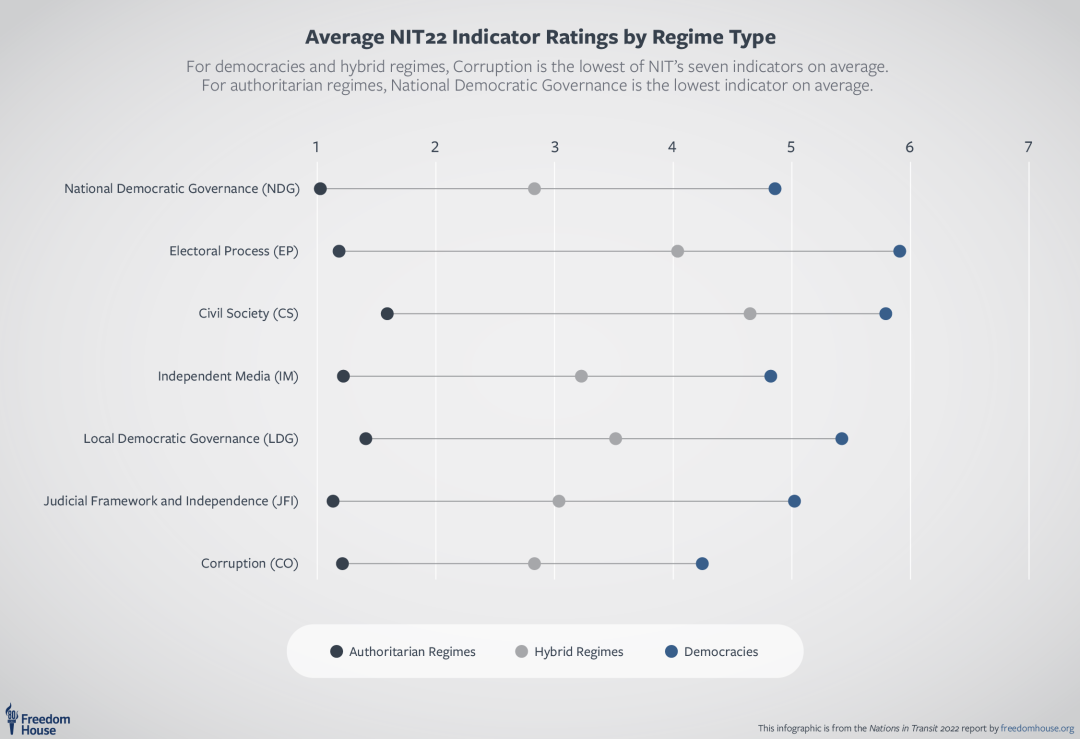 The report places special emphasis on Russia. It underlines that the violent, antidemocratic repression of media in the country has significantly intensified since Putin unleashed the war of aggression against Ukraine. As a result, what remained of Russia’s independent media sector was swiftly eliminated, with domestic outlets blocked or shuttered, international outlets intimidated into suspending in-country reporting, and new legislation banning the spread of “false information,” including any reference to the “special military operation” in Ukraine as a “war” or “invasion.” 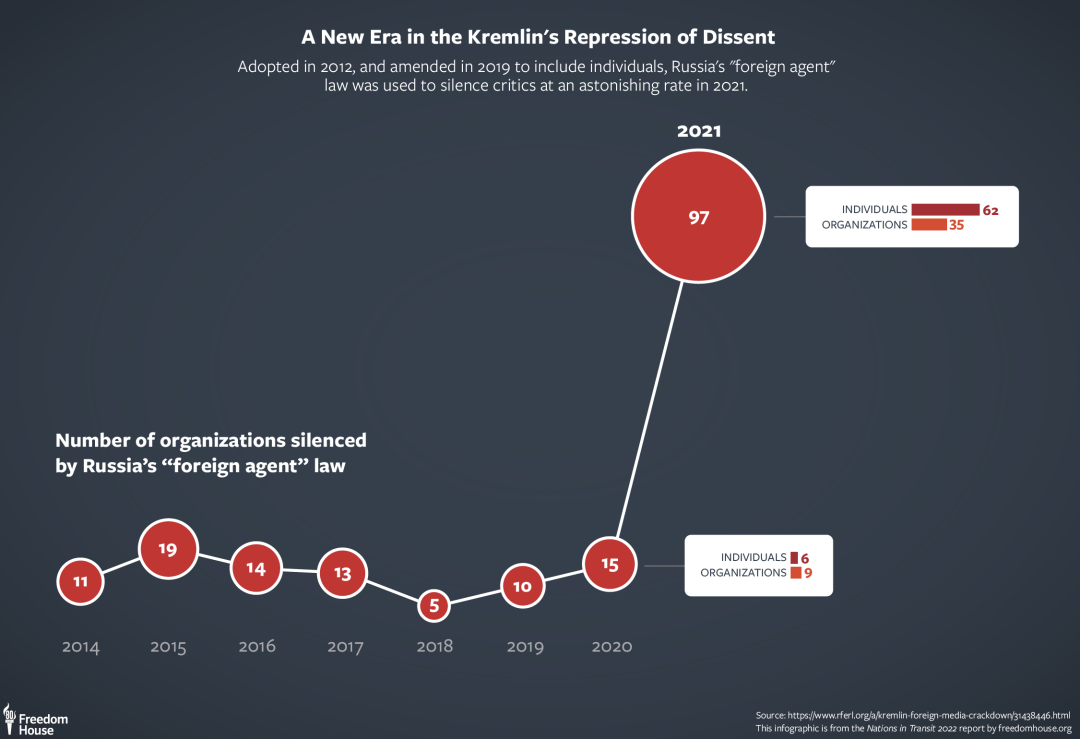 With the ongoing war in Ukraine, it is expected that the state of democracy in the Eurasia region will only worsen in the years to come. In this regard, NIT considers providing the public with access to fact-based information about current events as one of the best ways to combat authoritarian power and calls for support to independent media.

The report underlines that support for independent media in this region should concentrate on diversifying funding streams, addressing the politicization of news, and protecting editorial independence in democracies. As well as, on mitigating political interference in hybrid regimes, creatively addressing the lack of independent media in autocracies and protecting global internet freedom.

The report also urges the governments to ensure that laws protect the free flow of information, allow journalists access to elected officials, allow the public to place freedom of information requests, and guard against state monopolization of media outlets.